The HTC Vive Pro 2 is a VR enthusiast’s dream. Its 5K 120Hz display delivers the sharpest desktop VR experience I’ve ever seen. And while its design hasn’t changed from the 2018 model, it’s still very comfortable to wear for extended sessions. But its high price and reliance on old controllers make it a tough sell. And let’s be honest, it’ll take a lot to dethrone the $299 Oculus Quest 2 as the ideal VR headset for mainstream users.

That’s not who HTC Vive is really targeted at, though. Like the standalone Vive Focus 3, this headset is clearly geared towards professionals. But unlike that device, it also has plenty to offer gamers. For them, spending $1,399 on the entire Vive Pro 2 package would be worth it to play Half Life: Alyx in the best quality possible. And if you’ve already invested in the previous Vive Pro or Valve Index, you can nab the new headset on its own for $799. 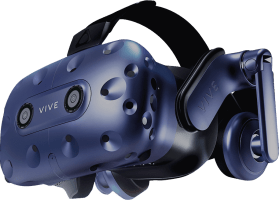 Just be sure to keep track of which Vive Pro is which, because they look practically identical. The Pro 2 features a black and purple color scheme, but its front facia, strap and headphones all look the same as before. The difference becomes clear once you put on the Vive Pro 2, though: Its 5K screen offers 2,448 by 2,448 pixels per eye, a huge leap ahead of the 1,440 by 1,600 pixels from the Pro. Plus the Pro 2’s LCDs have RGB sub-pixels, which helps make everything look sharper still. The screen can also refresh at up to a 120Hz, which is noticeably smoother than the previous 90Hz panel, and I appreciated the wider 120-degree field of view, which makes virtual worlds feel all the more immersive.

These specs may sound familiar, because the Vive Focus 3 also has the same 5K screen, it just happens to have a slower 90Hz refresh rate. But I came away far more impressed with the Pro 2, because it can easily run any PC VR game or app. The Focus 3, meanwhile, has a limited selection of mobile titles, and I was never able to successfully stream higher-end VR from my gaming PC. And, honestly, even if I got that to work, streaming is still a clear step down from running natively.

I revisited old and newer games on the Pro 2, and everything just looked fantastic. I kept getting distracted by the detailed environments in Half Life Alyx — a game that looked great on the Index, but has an extra level of polish with the Pro 2’s resolution bump. It’s sort of like the jump from 1080p video to 4K. You might not notice the difference at first glance, but once you start inspecting the finer details like grass and wood grain you can tell you’re working with more pixels.

Hopping back into Superhot almost felt like I was playing Superhot 2. I could make out plenty more detail in the game’s cyberpunk introductory room. And even though its aesthetic is relatively simple, the game’s enemies, weapons and environments all looked more detailed than I remembered. I also spent more time than I expected gawking at just about everything in the VR version of Hellblade: Senua’s Sacrifice. That game already looked impressive on a normal monitor, but in 5K VR I could appreciate Senua’s intricate character model even more.

As impressive as everything looked, though, I really wish HTC had upgraded the Pro 2’s controllers. Its full kit includes the same enormous wands that came with the original Vive in 2016. They work decently enough, but they’re not nearly as ergonomic as Oculus’s touch controllers, or even the Focus 3’s gamepads. They’re particularly archaic after experiencing Valve’s hand-tracking Steam VR controllers, which are bundled with the Index. Since it’s a SteamVR headset as well, you could always use the Index gamepads with the Pro 2, but that’s another $280 on top of an already expensive headset.

It also would have been nice to see HTC Vive upgrade the Pro 2’s design a bit. It’s still very comfortable, thanks to its plush cushioning along the front and back, as well as its balanced weight distribution. But the company could have taken a few cues from the Valve Index. Near-field speakers would have been a solid upgrade from on-ear headphones, especially since the Pro 2’s cans tended to make my head feel warm. The headset’s displays also generate a decent amount of heat as well, which led to some sweaty play sessions.

Apples MacBook Air M1 is $150 off, plus the rest of the weeks best tech deals

Apples MacBook Air M1 is $150 off, plus the rest of the weeks best tech deals